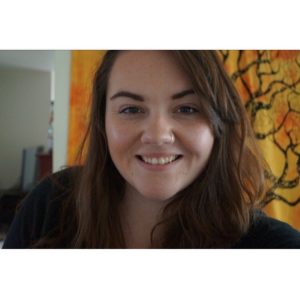 At first, the numbers didn’t add up. Jadie Dow was a good student, but she struggled with calculus. And sometimes, the first-generation college student wondered if she’d be able to pay for her education.

Fortunately, Jadie took advantage of the TRIO Student Support Services Program at Castleton’s Academic Support Center. She visited the Center’s Math Clinic. Thanks to the math tutors, she got through calculus. The TRIO Grants she received her freshman and sophomore years helped defray the cost of attending Castleton. Finally, she met with Academic Services Director Kelley Beckwith, who helped Jadie understand her bill and loan options. “With the grant and Kelley’s advice, I no longer had to worry about money,” says Jadie.

Today, the senior Journalism major with a minor in Business Administration is thriving at Castleton. A strong student with a GPA of 3.57, Jadie has been the editor of The Spartan, Castleton’s student newspaper, since Spring 2016 after writing for the paper since her freshman year. She also sings in Vocal Unrest, Castleton’s acapella group.

Jadie also has a gift for teaching. She is a Teaching Assistant for the Communications Department Feature Writing course. Since Spring 2015, she has been a Writing Tutor at the Academic Support Center. A gifted writer, Jadie finds teaching rewarding. “There’s that moment when you finally see it click in someone’s head – even when you think you’re not explaining it very well,” she says. Writing Specialist Bill Wiles praises her work with students. “Jadie is patient with struggling writers. She meets them where they are and brings them (sometimes kicking and screaming) to where they should be,” he quips.

Despite her current success, Jadie hasn’t forgotten what it felt like to be a new college student. For two years, she served as a Student Orientation Staff leader, helping freshman acclimate to college during orientation weekend and throughout their first semester in their First Year Seminar class. Dr. Andy Alexander, chair of the English department, felt grateful to have Jadie to support his class of TRIO students. “Like you hope all SOS will be, Jadie was an excellent role model for my first-year students, in just about every way,” he says. “She was funny, but she knew how switch gear when needed… it seemed to me that Jadie represented a quiet source of comfort to those students who needed it. One very important thing is that Jadie let the students know that she took her studies seriously AND that she had to actually work at things to do well.  She shared her study habits, and I think all these things combined served the students very well.”

Although Jadie is enjoying her final year at Castleton, she’s excited about what comes next. In the spring, she’ll begin an internship at the Rutland Herald’s newsroom. After graduation, she hopes to be a journalist and eventually edit her own newspaper. Someday, she plans to earn a graduate degree and teach journalism at the college level.

Jadie credits the Academic Support Center with her success and advises new TRIO students to visit the Center. “It’s all free and everyone is so helpful,” she says. “It won’t always be like that, so take advantage of that while you can.”