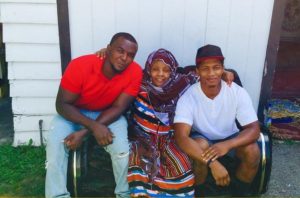 Some students’ paths to college are a little rockier than others. Adan Osman’s journey to Castleton began in Kakuma, a town turned refugee camp in Northern Kenya. His parents had fled there to escape civil war in their native Somalia.

At four, Adan started his education. But his first day of school was also his last. Violence greeted him and the other students on their way to the camp’s school. “I didn’t want to go to school to get beaten,” he recalls. “Some kids would go to school and never come back. So I stayed home and helped my mother.”

When Adan was nine, his family immigrated to Utica, New York. But being in the United States didn’t mean his battles were over. At his new school, Adan’s teachers placed him in a TV room where he watched movies during the day. “I saw The Lion King,” he chuckles. “It was my first American movie. I loved it. But it didn’t help me learn English.”

Starting college meant confronting a new set of challenges. “It was a whole new world; there was nothing familiar,” says Adan. He worried his English wouldn’t be good enough. And small, rural Castleton seemed isolated after vibrant, diverse Burlington. And it was far from his family.

One of Adan’s high school teachers urged him to sign up for Castleton’s TRIO program, saying it would provide him with the support he needed to finish his degree. Adan was skeptical, but he enrolled anyway.

Today, Adan has nothing but praise for Castleton’s TRIO program and the Academic Support Center’s staff. “They understand people from different cultures, and that’s the most beautiful thing,” he says. “Without them, I wouldn’t be here ready to graduate.” He is particularly grateful to Academic Counselor Becky Eno. “She has helped me a lot with my writing,” he says. “She sat down and showed me exactly what I needed to do. My papers have gone from C+ to A+.”

Adan’s writing skills have helped him succeed outside of the classroom. As a part-time employee at the Park Street Program, a residential treatment program for juvenile offenders, Adan must prepare reports about his work with clients. “I’m proud of my writing as a social worker,” he says.

Perhaps because of his bumpy beginning, Adan has a strong desire to help others thrive. In addition to his job at Park Street, he and some friends from Burlington are founding Building Blocks to Success, a multicultural mentoring program for young men. He is working with education professor Emily Gleason to plan a course for educators who will be working with Syrian refugees. And between classes and work, Adan spends lots of time at the gym, where he informally mentors those new to exercise. He thinks of starting a fitness bootcamp to help others get in shape. He sees clear parallels between himself and the young people he helps. “When you grow up on your own, not having someone there for you, you do things on your own,” he says quietly. “No one is there to build and help you up. I want to give back and help others who haven’t had the same opportunities I’ve had.”

In May, Adan will graduate with a Bachelor’s in Social Work degree. After graduation, he and a friend hope to open a Somali restaurant in downtown Burlington. He is excited about introducing Vermonters to Somali food, which fuses Middle Eastern, East African, West African, and Egyptian influences. “I’ll be using my degree in a different way to make a difference in my community,” he muses. “Food brings people together, and it’s an opportunity to teach people about the culture.”

Becky Eno has high praise for Adan. “He is a TRIO Star because he turns his adversity into strength,” she says. “He has transformed himself from a freshman (and sophomore) who doubted that he should even be in college into a successful senior. He encourages other students to realize their own best potential.”

Sorry, the comment form is closed at this time.