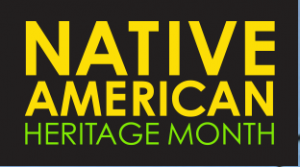 November is Native American Heritage Month, after Vermont celebrated our first official Indigenous Peoples’ Day on October 14, so we are continuing our recognition of our land’s native heritage and the indigenous communities that have survived into the 21st century.

In May of 2019 Governor Phil Scott signed a bill officially replacing Columbus Day with Indigenous Peoples’ Day, and issued the proclamation below. (Click on the image for the PDF).  It states, “Vermont recognizes it was founded and built upon lands first inhabited by Indigenous Peoples of this region – the Abenaki, their ancestors and allies – and acknowledges and honors these members of the community.” The federal government still recognizes Columbus Day. 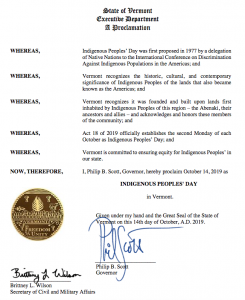 To learn about why states are making this transition, here’s a piece from National Public Radio:  Columbus Day or Indigenous People’s Day?

The library had a book display up in October on relevant topics. Click to see the list of books featured.

For advice on what to read to learn more about Native Americans, here are some bibliographies:

You can learn more about the people indigenous to any particular land with a new app and website called Native-Land.ca. Here’s what the whole U.S. looks like with indigenous groups sketched in, below. Click on the image to go to the website and browse, or search by address, to see what tribes were native to any given region. 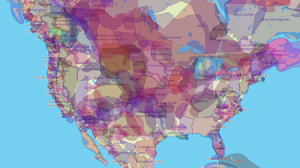