A Gift of Friendship

Last Winter I had no notion when I responded to Debbie Singiser’s email requesting volunteers for hosting international students the enormity of the gift we would be receiving. The gift was the very special friendship of three incredible Chinese international students, Rita, Rebecca and Tami. The girls have brought incredible joy and enrichment into our lives. Last night was our first time seeing the girls after their summer break, which they spent back at home in China. After dinner I sat back and watched the beautiful interactions in our home, and once again felt so thankful. Sitting there at the dining room table amidst the food, music and candles I heard Mandarin being spoken, girls giggling, and our young daughters learning about Chinese art, history, calligraphy, and most importantly connecting as family with our sweet friends. We spent the next day exploring a Vermont farm, something I have taken for granted. I have to admit watching all of the girls petting chickens, milking cows, and riding on a tractor is so much more fun through the lens of someone who has never experienced it before!

Initially last winter when I spoke with Debbie on the phone regarding hosting an international student she informed me that many of the international students would not be flying home for the holidays, and would be alone on campus. She informed me that many of them would love to experience an “American Christmas” and share a connection with a family. The prospect of having a student from another country to share our traditions and learn from theirs sounded like a fresh way for our family to celebrate, and appreciate the true meaning of Christmas. We told Debbie we were interested in hosting more than one student, and learned that there were three Chinese girls who were interested in staying together and spending time with a family. Our family suddenly became giddy about Christmas – What could we share with them? And experience together? Should we take them sledding? Or to see the Christmas lights?!

Last Christmas with the three girls was just the beginning of this incredible gift of friendship to our family. We have since had many adventures with the girls. We have all been Nordic and alpine skiing, and sledding together. What a joy to watch our 9- year-old teach the girls how to ski! These adventures have all ended with a lot of giggling, hot cocoa, and a new appreciation for things we tend to take for granted.

Our family spent an entire evening last fall learning to make Chinese dumplings, even our 5-year old was part of the dough rolling and vegetable stuffing. We love Chinese dumplings! We celebrated the Chinese New Year in authentic style, and learned a Chinese board game thanks to our sweet friends. We have learned some new traditions, and shared ours. We are thrilled to have another year with “our girls” now that they have returned to Castleton for the year. We would encourage other families to consider hosting a student or two. It has been a huge blessing to our family, and has carried the energy of adventure, connection, and curiosity into our home. We are excited for this next year, and for the experiences and adventures we will share! 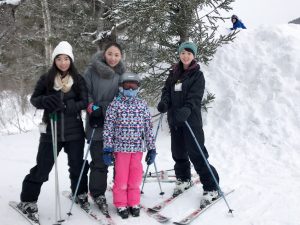 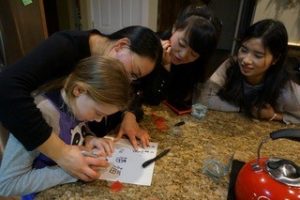 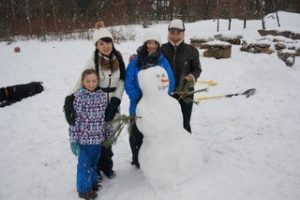 (Editor’s Note:  In May and June, Jocelyn traveled to several European countries to see and learn about new places and to reconnect with current and former Castleton students along the way.  She wanted to reflect on her experiences by writing a series of stories for the blog.  This is Jocelyn’s second of three stories.)

I don’t have much to say about Switzerland since I was there for just over three days, and I only visited one place.  However, I can tell you why I fell in love. I first fell in love with this country when taking the train from Zurich, a main city of Switzerland, to Interlaken, a small town and my desired destination. Almost the whole ride I was entertained simply by the mountains that stood a short distance away from the train’s view. It was hard not to look.  When I arrived in Interlaken, I was in awe. It is completely surrounded by mountains. I compared these mountains to tall buildings in big cities- that’s how close they were. The only difference being that you can hike up or take a cable car up any of the mountains. I arrived in my hostel in Interlaken late at night and it was hard for me to fall asleep because I was too eager to begin adventuring Switzerland.

Interlaken is built on a narrow stretch of valley, between the emerald-coloured waters of Lake Thun and Lake Brienz, and it has old timber houses and parklands on either side of the Aare River. In addition to its surrounding mountains, it has dense forests, alpine meadows and glaciers, making it an easy and desirable attraction for adventure travelers. Many travelers go there to do adventure activities offered such as paragliding, skydiving, canyoning, mountain biking, hiking, white water rafting, bungee jumping, paddle boarding, snowboarding, skiing and more. My first day I rented a stand-up paddleboard which took up the first half of my day. After that I went canyoning, which is the sport of exploring a canyon by engaging in such activities as rappelling, rafting, and waterfall jumping. It was by far the best thing I did in Switzerland and one of my favourite memories of Europe.

Later that evening back at the hostel it was karaoke night. Balmers Hostel is one of Europe’s first and most famous hostels. It has pool tables, ping pong tables, a life-size chess board, an enclosed backyard with hammocks, a bar, and a club. The atmosphere is amazing and the staff is great. Each night, there is a different themed party. This particular Tuesday night it was karaoke and it was a blast. People from all over the world got up to sing whatever they wished. I even got on the floor with two other Canadians to sing the Canadian national anthem and everyone was really into it!

The next day, I went white water rafting with a group of 40 people, which I had booked through the hostel. We rafted on emerald-coloured glacier water along mountains and small villages. The two-hour rafting trip ended with an opening to a beautiful lake and we settled there for a while. Switzerland isn’t as hot as Italy, but it was still hot for a Canadian, so jumping into the lake felt amazing. While I was there, the temperature was around 26-28 degrees Celsius.  Therefore it was a bit hotter than I was used to but not too hot, another reason I really liked Switzerland. For the remainder of the day, I relaxed on a hammock and walked around Interlaken. That night, it was beach night at the hostel and this was one of my favourite nights in Europe. I met people from Brazil, New Zealand, Australia, South Korea, Nova Scotia, Switzerland and the U.S. for a total of just fewer than 20 people. We exchanged travel stories and desires.  I learned a lot from them.

It was during these moments in talking to other travelers when I was reminded how important it is to travel. My destination before Switzerland was Amsterdam, which I absolutely loved, but on the last day there and en route to Interlaken, I had a lot of fallouts and hit a breaking point of feeling homesick. But this feeling ended when I arrived in Switzerland because it was very similar to home. I’m from British Columbia, Canada, which is surrounded by mountains so the scenery in Switzerland brought me comfort. Also the people I met in Switzerland were very relaxed and kind people, like Canadians. Switzerland is in my future as I hope to play pro hockey there once I graduate from Castleton and if that doesn’t work, I will go there anyway because sky diving from atop the Swiss Alps is on my bucket list. To end this, I will finish with this quote I stumbled upon: “Switzerland is a place where they don’t like to fight, so they get people to do their fighting for them while they ski and eat chocolate.” 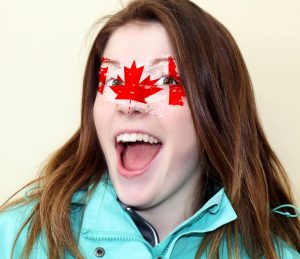