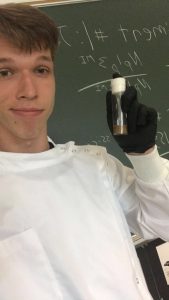 Growing up on the island of Guam, Weslee Thompson did not imagine attending college in Vermont. A talented athlete, he seemed destined for soccer stardom. When he was seventeen, an injury derailed his dreams. He still recalls the hurt he felt when his physical therapist told him he would never again play competitive soccer.

But one dream’s demise led to another. “Having a negative experience with a physical therapist made me want to pursue physical therapy,” Weslee says. “I knew what it was like to be in a vulnerable position. I wanted to come alongside people and work with them.” At the time, Weslee hoped to rehabilitate injured athletes.

Weslee’s new goals led him to Castleton University, where he pursued a double major in health science and psychology. Although the health science degree would give him the prerequisites for graduate school, he knew understanding human behavior would allow him to better support patients.

Like all first-year students, Weslee had to adapt to a new academic environment. Unlike most of his classmates, he had to pay his own way through college. He accepted a full-time position at McDonalds and quickly became a shift manager.

Juggling a full-time job and courses for two majors proved challenging even for a student as dedicated as Weslee. He invested in a planner. “I discovered a passion for color coordinating,” he chuckles. Always a competent writer, he met with Writing Clinic tutors and the Writing Specialist to make his papers even stronger.

Weslee’s formula worked. Now in his junior year, he still works full-time while maintaining a 4.00 GPA as a double major. Outside of class, he embraces other intellectual opportunities. This summer, he worked with psychology professor Greg Engel, conducting genetic research on ethanol tolerance in fruit flies.

And despite Weslee’s hectic schedule, he still finds time to help others. He is a writing tutor at Castleton’s Academic Support Center; he has also tutored students in anatomy and psychology. For the past two years, he has served a Student Orientation Staffer (SOS), helping new students acclimate to life at Castleton. Being a mentor has proven rewarding. “I’m most proud when people come up to me between classes and say I’ve helped them,” he says. “I’m more proud of that than anything I’ve accomplished myself.”

The desire to help others led Weslee to Castleton. Since then, his journey has taken another turn. This summer, an internship at Rutland’s Back on Track Physical Therapy affirmed his interest in the field. Through his internship, he discovered a passion for helping injured veterans. “I’d like to help those who’ve served get back to their lives,” he says quietly.

During his time at Castleton, Weslee has made an excellent impression on faculty and staff. “I feel immensely lucky to have known Wes as a student and an employee,” says Doe Dahm, Writing Specialist and adjunct professor of English. “It’s rare to find a student with his level of personal and intellectual maturity. When I first met him and he said he wanted to be a physical therapist, I thought, ‘Yes. I could envision him working with my elderly family members.’ He’s ready to enter the professional world.”

In the meantime, Weslee is making the most of his time at Castleton. He hopes that new students will also enjoy their undergraduate years. “Time management is crucial, but it is possible to breathe,” he says. “Make sure you give yourself time to pursue your own passions.”