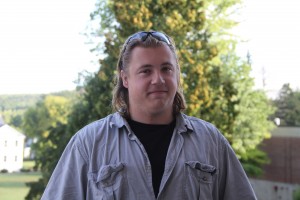 Matt Fortier admits it: he wasn’t the most engaged student at Burr and Burton Academy in Manchester, Vermont. He was more interested in fitting in and having fun with his friends. But he’d enjoyed his psychology class, his grades were good enough to get him into college, and the first-generation student arrived at Castleton hoping to major in psychology.

Matt may have been a lethargic student in high school, but Castleton’s faculty woke him up. One day, he asked his psychology professor a question. “I don’t know,” his instructor replied. “You figure it out. Then come back and tell me.” This was startling, but exciting. Matt liked taking responsibility for his own learning, and he appreciated being treated as a member of an intellectual community. He immersed himself in study and research, earning a cumulative GPA of 3.74 and serving as a Teaching Assistant in psychology and English classes. He is a member of the Phi Eta Sigma Honor Society.

Now a senior, Matt is working on his honors thesis, which explores the relationship between wisdom and well-being. After graduation, Matt hopes to pursue a PhD in psychology at University of Vermont or Temple University. He is particularly interested in lucid dreaming and its implications for treating phobias and Posttraumatic Stress Disorder.

In addition to his professors, Matt credits Castleton’s Academic Support Center (ASC) and TRIO with his success. A Summer Transition participant, he has also taken advantage of the ASC’s Writing Clinic, graduate school counseling, and academic mentoring services. He has also been a Summer Transition Mentor and tutored other students in psychology.

“Matt provides a wonderful model of how to use college to change your life,” says Becky Eno, Castleton’s Academic Counselor, who has worked with Matt in Summer Transition. “He appreciates the way faculty and staff ushered him into the intellectual community as a valued, contributing member, and he enjoys welcoming other students in as they show interest. And he does it all with his inimitable, quirky sense of humor!”