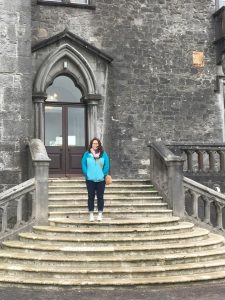 Christin at Kilkenny Castle in Ireland this summer.

Like many first-year students, Christin Martin was homesick when she arrived at Castleton. She missed Plainfield, the small Vermont town where she grew up, and her large, close-knit family. “There were a lot of calls home,” she recalls with a chuckle. “I talked to my mom at least once a day.”

Despite her worries, Christin threw herself into life at Castleton. Through the Summer Transition Program, she made friends and connected with the staff at the Academic Support Center. To pay her tuition, she worked various part-time jobs. She joined clubs. She studied hard – and made the President’s List a few times.

Today, it’s hard for Christin and her mentors to recognize the homesick girl who arrived at Castleton almost four years ago. “During her first year, Christin struck me as a quiet student on the verge of becoming wonderful, and she has continually grown in confidence, depth of insight, and professionalism,” says Becky Eno, Castleton’s Academic Counselor.

A double major in Social Work and Sociology, Christin has a 3.94 GPA. She sits on the Honors Council, the Themed Housing Advisory Board, and the Social Work Advisory Board. Christin also juggles her academic achievements and extracurricular involvement with three jobs on campus, including a program assistant position at Academic Support – a role created just for her.

Despite Christin’s demanding schedule, she finds time to give back to TRIO. As an Upward Bound and Summer Transition Program mentor, she helps other first-generation students acclimate to college life. Last summer, she coordinated a TRIO Texting mentor program for incoming students as an AmeriCorps Vista volunteer at Academic Support. Christin enjoys connecting with new students. “If students text me at four on a Sunday and they know I’ll reply, it means I’ve established a rapport with them,” she says.

Castleton’s staff anticipate great things for Christin. “She’s been a role model for many students as an undergraduate and will undoubtedly make Castleton proud as an alum,” says Kelley Beckwith, Director of Academic Services.

After graduation, Christin plans to work in residence life while attending graduate school. Eventually, she hopes to become a school or college counselor. “I met with a VSAC counselor while I was in high school,” she says. “It did a lot for me, and I’d like to help students who are facing what I faced.”

Christin hopes other students will have the same chances she’s had. “Pay attention to what’s going on,” she urges. “Be aware of your financial situation, grades, and opportunities on campus. They’ll help you build a résumé and lead to other opportunities.”