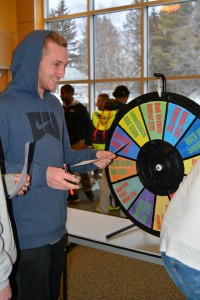 As college students, we’re caught up with our social and academic lives. With so many thoughts zooming in and out of our heads, where do we find time to think about life after college? Although we’re in college to prepare for our careers, we rarely ponder life after graduation.

It’s time to narrow that gap. On Wednesday March 23, 2016 from 5:00-6:30 PM in the 1787 Room, the Heritage Family Credit Union, Academic Support Center, and Student Life will host a Game of Life Financial Reality Fair to heighten students’ awareness of financial literacy and personal finances after graduation. You can start at 5, 5:30, or 6 pm, and it takes about a half an hour to play. After you play, stick around for free pizza and a chat about the game.

It works a lot like the board game Life. You’ll choose a career and create a monthly budget based on a starting salary for that position. Then you’ll visit various stations to explore housing, transportation, food, night life, pets, furniture, and cell phone options. See how far your money goes! In the end, you’ll meet with a financial advisor to discuss your budget and assess how well you made out. But don’t worry: in the Game of Life, you get a second chance to make your budget work!

This will be the second annual Game of Life held at Castleton. Last year, 100 students attended. We’re hoping this year will be even bigger – and we can’t wait to see you there.

Katie Haseltine is a junior Management and Marketing major who tutors math and writing and serves as a Student Ambassador in Admissions at Castleton University. She is also actively involved in planning events through the Campus Activities Board. 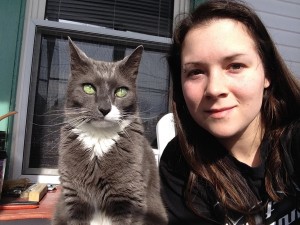 Some students start college, earn excellent grades, and graduate in four years. For others, the path is a little less direct. Sometimes, they even take a detour. That’s what makes their eventual success all the more remarkable.

In high school, Rachel Brigham was a good student. “I did all my homework at school,” she said. “My time was structured for me.” When she enrolled in Castleton in Fall 2006, she continued this pattern, earning a G.P.A. of 3.74. Both math and writing came easily to the health science major, so her future seemed bright.

The years rolled on – and Rachel’s grades plummeted. Twice, her semester GPA dipped below a 1.0. Finally, in Fall 2010, at the start of what would have been her fifth year, Rachel withdrew from Castleton.

In the real world, Rachel worked over sixty hours a week to support herself and repay her student loans. She knew that taking time off from her education was the right thing to do, but the fact that she hadn’t finished her degree nagged at her. The following autumn, she took two classes at Community College of Vermont (CCV). “I got a B in one and failed the other,” she said. “That showed me I wasn’t ready to put in the time and effort I needed to go back to school.”

Finally, in January 2014, Rachel reached a breaking point. “I couldn’t keep working just to pay back my student loans and not have a degree,” she said. Once again, she enrolled at CCV. This time, she earned an A+ in the class she took. Rachel was ready to return to college.

That fall, Rachel enrolled at Castleton again. Since then, she has earned mostly A’s in her classes despite the fact that she works 66 hours per week while taking courses part-time. Rachel, who once skipped classes to hang out with her boyfriend, has become a master of time management.

She’s also not afraid to get help when she needs it. After failing the first exam in her physics class last semester, she met with Deborah Jackson, Math and Science Specialist at Castleton’s Academic Support Center. Through regular meetings with Jackson and diligent studying, Rachel earned a B+ in the course.

Rachel’s efforts have paid off: her cumulative G.P.A. is now 3.0. But Rachel, who is scheduled to graduate in May, intends to keep studying. For the last few years, she has been a caregiver for older people, including those with dementia. The work, although challenging, has sparked her interest in elder issues and geriatric nursing. She now hopes to pursue a nursing degree at Castleton or the University of New Hampshire.

As a caregiver and future nurse, Rachel wants to make a difference in others’ lives. However, she also hopes her story will motivate others to pursue their dreams – even if they’ve had some bad semesters. She advises students not to put off assignments. “No one wants to sit down and write a ten-page paper,” she said. “It’s better if you start early and don’t procrastinate.”

She also emphasizes the role of healthy relationships in academic and professional success. “Surround yourself with people who want you to succeed,” she said. “My current boyfriend is supportive of the work I do; it’s important to him that I get through school.”

Rachel’s determination has also impressed faculty and staff. “Rachel has demonstrated grit and resilience,” said Deborah Jackson. “Despite hardships, she has refused to give up her goal of earning a degree. I believe she could inspire other students inclined to quit when facing a challenging semester.”