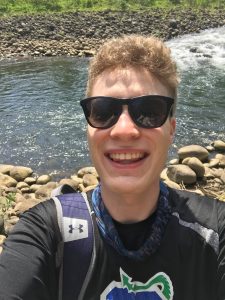 When Ethan Cameron-Vaupel first arrived at Castleton, he found college a little daunting. Like most first-years, he had to balance his studies and social life. But unlike many of his peers, Ethan had a learning disability. “I have to read a passage two to four times to figure out what it’s telling me,” he explains. “It takes a while for things to marinate.”

Fortunately, Ethan quickly developed connections at Castleton. Through Summer Transition, a weeklong program for new students, Ethan met other first-years and Academic Support Center (ASC) staff before the fall semester began. The ASC quickly became Ethan’s home base. He met with Math and Writing Clinic tutors when necessary, and Becky Eno, the academic counselor, helped him explore financial aid options. Ethan is grateful for the support he received at the ASC. “Everyone there knows me and wants me to succeed,” Ethan says. “It’s the one part of campus that is with you all the way.”

All that encouragement, coupled with Ethan’s own determination, worked. As Ethan’s confidence grew, he threw himself into campus life. The music minor sang bass with the Castleton Chamber Singers, the University Chorale, and Vocal Unrest, Castleton’s acapella group. To gain leadership skills, he joined the university’s chapter of the American Choral Directors Association and served as Vocal Unrest’s president for two years. He played tennis, even ascending to team captain his junior year. Despite his initial qualms, he also succeeded in the classroom: Ethan has made the Dean’s list a few times during his academic career.

Loving college life, Ethan wanted other students to enjoy the same opportunities he did. For that reason, he became a Summer Transition and TRIO Texting mentor. Again, Ethan sought additional challenges, serving as Lead Summer Transition Mentor his junior and senior year. As a mentor, Ethan strives to be personal and inclusive. “I try to become friends with someone before I mentor them,” he says. “I want everyone to feel important and cared for.”

ASC staff praise Ethan’s warmth and enthusiasm. “Ethan is exceptionally energetic and positive,” says Gerry Volpe, Coordinator of Disability Services. “He is able to drive excitement and investment in students.” Because of his excellent record, Ethan was hired as a TRIO Program Assistant in Fall 2019. In this role, he met with students and collaborated with Volpe to develop student programming.

Today, Ethan is student teaching at Poultney Elementary School. After graduation in May, he plans to teach elementary school, ideally second grade. Although he eventually hopes to settle in his native Vermont, he would like to work in Massachusetts or Colorado first. He believes his mentoring experience will make him a more empathic teacher. “It’s given me a greater appreciation for diversity, including neurodiversity,” he says. “It makes me a heck of a lot more patient in the classroom.”

Recalling his own challenges, Ethan hopes other college students will persist through theirs. “Push!” he advises. “Do not give up no matter what happens. Once you’re shaking hands with the president of the university and receiving your diploma, it will all be worth it.”