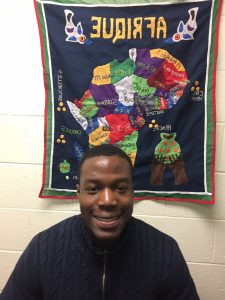 When Adnane Adossama arrived at Castleton, he wasn’t sure he could succeed at college. Still, he worked hard and made the Dean’s List his freshman year. That boosted Adnane’s confidence, but his struggles had just begun.

“I had to decide what to do with my education,” says Adnane. “I wasn’t sure whether I wanted to pursue exercise science, athletic training, or transfer to another school. I didn’t have a focus, but too many.”

To get some clarity about his goals, Adnane met with Kelley Beckwith, Director of Academic Services. She dissuaded Adnane from dropping out, showing him that finishing his education would improve his career prospects, regardless of his major. She also helped him navigate university life, communicate with his professors, and better understand the resources available to him. “Meeting with Kelley gave me the feeling I wasn’t alone and someone wanted me to succeed,” says Adnane. “She understood my goals and pointed me in the right direction.”

After meeting with Beckwith, Adnane started taking advantage of the Academic Support Center’s resources. He met with various tutors, including a chemistry tutor named Katie Wielgasz. She not only helped Adnane master chemistry; she taught him how to break up assignments and teach himself new material. “It’s something I carry over into other classes,” says Adnane.

Today, Adnane is a junior exercise science major with minors in business administration and physical education.  A student-athlete, he has maintained a 3.38 GPA while playing football and lacrosse. In addition, Adnane works part time in Castleton’s mailroom and, for the last two years, he has mentored a student at Castleton Elementary School.

Adnane’s work ethic and dedication have won the respect of staff and students alike. “He is a leader and role model both in the classroom and on the athletic field,” says Beckwith. This fall, Adnane enjoyed serving as on a mentor panel for first-year football players. “It’s good for younger players,” he remarks. “We have experienced everything they might go through, so we can only make their experience better.”

After graduation, Adnane plans to attend graduate school and pursue a career in physical therapy. Because of his lifelong passion for athletics, he wants to work with athletes, either training them for their sport or helping them recover from injuries.

Adnane is grateful for the support he has received both at Castleton and from his family. He hopes other students learn from his journey. He has three tips for new students. “Never take any class for granted because they all count,” he says. “Make sure you take full advantage of the resources you are offered. And finally, understand you have people at the university who want you to succeed.”