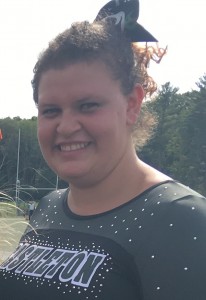 Before Kyla Leary enrolled at Castleton, she wasn’t sure whether college was right for her. She’d struggled in high school, and her high school teachers had emphasized how challenging college classes would be. “I was afraid of the volume and level of work,” she says. And like many new students, she worried about meeting new people.

Once Kyla arrived in Castleton, she found a host of people waiting to welcome her. “I had an amazing suite my first year,” she says. She joined the cheerleading team and made more friends there. She took classes in Mandarin Chinese and studio art. And despite her initial anxieties about meeting new people, she discovered she had a gift for presentations when she earned an A+ in Effective Speaking. Her professors proved friendly and approachable, and though Kyla sometimes needed help, she found it – and lots of encouragement – at the Academic Support Center (ASC).

Today, Kyla is a senior Ecological Studies major and Global Studies minor with a 3.15 G.P.A. She balances her academic achievements with athletics: she is still a member of the cheerleading team, and she plans to join the varsity track and field team this spring. She attributes her success to the assistance she received through Castleton’s TRIO program. During her time at Castleton, she has taken advantage of the ASC’s tutoring services and met with many of its full-time staffers. “It’s so nice that we don’t have to pay for tutoring; it’s not that way at other colleges,” she says. “And each year, I’ve learned more about time management, improved my math and writing skills, grown socially, and become more independent. I can figure out when and how to ask for help.”

After graduation, Kyla plans to work at Johnson Group Consulting, Inc., the national public health advocacy firm where she has interned for the last two summers. During her internship, Kyla discovered she had a knack for data when she caught a serious error in a report. Kyla’s attention to detail impressed the firm’s director, who offered her a full-time position after graduation. Kyla also plans to take classes in public health after she leaves Castleton. But her ambitions don’t end there: she hopes to work overseas for a bit and eventually build a career in maternal-child health. A lifelong animal lover, she also dreams of extending her advocacy to animals.

Although Kyla seems to have the world at her fingertips, she still remembers what it felt like to be a new student in an unfamiliar environment. She encourages other students to seek support at the ASC. “I always tell other kids to ask for help, especially if they had a 504 or IEP plan in high school,” she says. “I tell them not to worry about what others think and to not think of any support they receive as an advantage or disadvantage – it’s just a resource. And the ASC is just such a good, safe place to study. Everyone in the department is working for you.”