October 28, 2019 by Charlotte Gerstein in News | Comments Off on Vermont Reads March: Book One 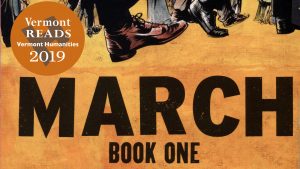 Have you read this year’s Vermont Reads book yet?

March: Book One is the true story of U.S. Congressman John Lewis’s youth and early involvement in the Civil Rights Movement, told in graphic form.  Vermont Reads is a program of the Vermont Humanities Council.

Join Vermonters in reading the book, then join library staff for either

The CU library has multiple copies to loan. Ask at the Circulation desk.
(It’s only 121 pages long!)

More about the book:

“It is the first of a trilogy written by civil rights icon John Lewis, in collaboration with co-writer Andrew Aydin and award-winning graphic artist Nate Powell.

Lewis was chairman of the Students Nonviolent Coordinating Committee (SNCC) and was considered one of the “Big Six” leaders of the civil rights movement. He has served in the US Congress since 1987 and was awarded the Medal of Freedom by President Obama in 2011.

Book One tells of Lewis’s childhood in rural Alabama, his desire as a young man to be a preacher, his life-changing interactions with Martin Luther King, Jr., and the nonviolent sit-ins he joined at lunch counters in Nashville as a means of undermining segregation.

The narrative continues in subsequent books to tell of the 1963 March on Washington (Book Two) and the march across Edmund Pettus Bridge in Selma, Alabama in 1965 (Book Three). All three volumes illustrate the story of Lewis’s commitment to nonviolent protest in the pursuit of social justice.”

The library also has Book Two and Book Three in the trilogy. Click for more info about those books, the call number and to see if the book is checked out.

For more resources, see a discussion guide from the Anti-Defamation League:
https://www.adl.org/education/educator-resources/childrens-literature/march-book-one